Posted on: Jun, 2012 By: Kara Jones
What Version or Year of PowerPoint do I really have??

This question is actually very common among many folks, and we have decided it is time to address this.  We’ll be starting with PowerPoint 2007 vs. 2010.  There are several ways to determine which Year of PowerPoint you are using, we’ll start with a fairly straight forward method:

If you are not able to locate the icon on your desktop etc, you can also check when you are IN PowerPoint by checking the upper left corner of your screen.

PowerPoint 2007 has this image: (Note the circle with the Windows logo in it)

PowerPoint 2010has this image: (Note the box with the letter P in it) 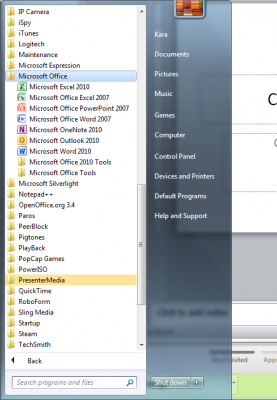 Next, you can see which Version of PowerPoint you have as well as the year by going through PowerPoint’s help system. This is super helpful, as it can help tell whether or not you have the latest Microsoft Update installed. I will start with the 2007 version, as it is slightly different than 2010. 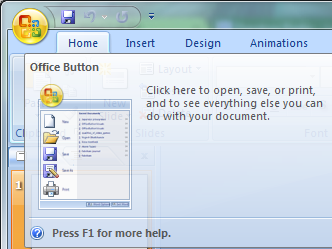 Go to “PowerPoint Options” at the bottom, center of the dropdown list. 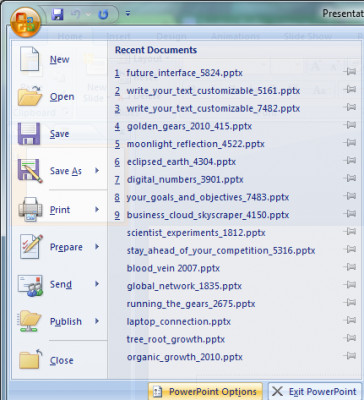 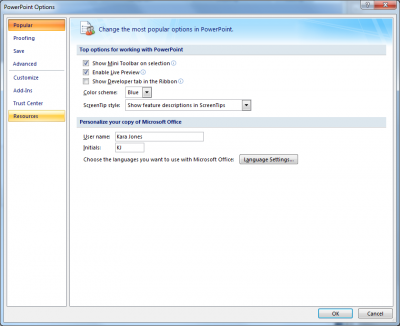 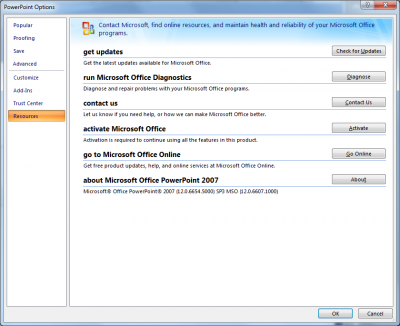 Now let’s go ahead and determine which version of PowerPoint 2010 you may have.  Start by opening PowerPoint, then click “File” in the upper left corner of the Toolbar.

Next, you will see lists of recent presentations and recent places.  “Recent” is typically highlighted at this point.

Next, click on “Help”, located three options from the bottom. 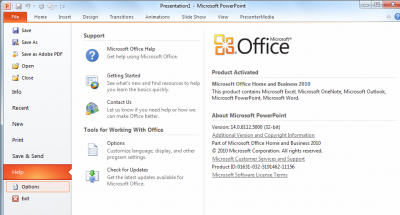 Thanks for taking the time to read through this brief introduction on PowerPoint Versions, happy presenting!

By: Kara Jones
Kara is highly creative and forward thinker. She has a wonderful Husband and a beautiful son. She and her husband enjoy playing with their son and also enjoy diving into a good video game.

May 10, 2013 -
Bentley Jones
I am just amazed at the beauty of your animated presentation templates. I certainly will be subscribing in order to be able to use same.
Aug 21, 2014 -
jyothika
can you please say how to find which version of power point iam using
Sep 04, 2014 -
Mike Weber

You should be able go to File, Account and it should say inside your Power Point. Otherwise you can go to your Windows button and computer to see which version of Office is loaded.
Mar 19, 2015 -
Sandra Standish
I have powerpoint 2013. Is this going to be a problem?
Mar 20, 2015 -
Mike Weber